For his 14th birthday we gave Ricky a 1983 Jeep Cherokee. 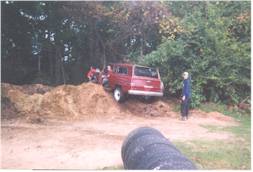 He had immersed himself in 4-wheelin' over the previous year or so reading magazines and checking out videos. We hoped to someday get this mean machine on the road, but in the meantime he and I worked on it and he drove it around the farm on a grueling off-road course he and his cousin Bryan built in the woods.

This restoration project has turned out to be quite a challenge, a lot of fun and a little more expensive (see our budget) than I ever anticipated. But as a father/son project it can't be beat and it's worth every penny. Here's what we started with: 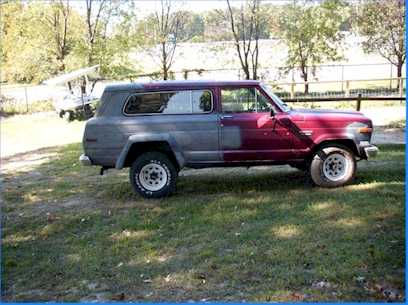 First we gave it a coat of primer, rebuilt the floor inside with sheet metal and rivets, coated the floor with bed liner, replaced the power steering belt, removed the bumpers, put on some seat covers and Ricky ran her for a couple months till the transmission finally gave out. We knew we had a transmission problem from the start so this wasn't a surprise. Off to the transmission shop she went for a rebuild. In the mean-time we picked up some nice 15x33x12.5 mud terrains on Ebay and chopped the fenders back to make them fit. Here's where she stands:

Ricky was still running the heck out of her on his off-road course back in the woods. Check it out: 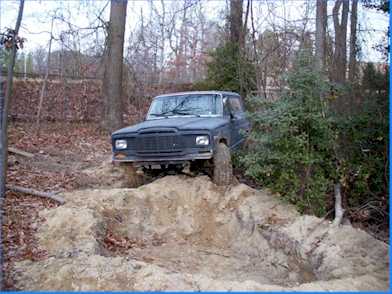 We had a long way to go and things kept breaking as quick as we fix something else, but that's half the fun. The other half of the fun is getting stuck, spinning wheels, slippin' and slidin', and admiring our mud spattered, rusty, dented classic Jeep. Only now she is no longer rusty and dented. Check out the finished project!

It is a work in progress and Ricky has plans to put the running gear from an old one ton chevy under her. Stay tuned...

Fall 2003, the project continues. We took the truck to Baxter's Tire & Auto in Pasadena, Maryland over the summer when we had a problem with it not starting. They kept it for weeks and replaced pretty much every ignition component to the tune of about $1000 worth of work. The final result was they got it started, but it had no power and was backfiring out the exhaust something fierce. They suggested that maybe since the car had been sitting for about six months we 'drive it for a while' and see if it cleared up. I smelled something fishy from the getgo, but they agreed to transport the car back to the farm. That turned out to be a stealth operation. One fellow drove the jeep to the farm (barely running, backfiring, spitting and sputtering) and another followed. The driver jumped from the jeep into a vehicle that followed him there and tore out of the driveway, obviously not wanting to talk with us. Good riddance, I say!

This is really only part of the Baxter story. My biggest disappointment with the business was when only days after we left the jeep in their care we got a call from them saying that the tires and wheels had been stolen from the car. These were Goodyear 33" MT. Not new tires by any means but we had no intention of replacing them any time soon. Baxter would accept no responsibility and we ended up forking out another $1000 for new tires and rims. Needless to say, Baxter's Tire & Auto has lost our business.

We drove the car a while and nothing changed. My brother-in-law Joe came down to help us put the finishing touches on the jeep so we could go for inspection. He puzzled over the backfiring/no power problem for one evening and decided to call a friend of his with a little more engine savvy. His friend came down a couple days later and when he left the car was running better than it ever had. Diagnosis: two spark plug wires attached to the wrong plugs, a part missing that keeps the distributor cap from turning, a little timing adjustment and tune the carb. Gosh, I wish I'd have called Joe about $2000 ago.

Oct. 2003. Ricky and I worked on the floor last week and installed the front seat belts. We're working on the doors and locks now, then check the lights and things. A little body work and we should be ready to go.

10/26/03 - We scavenged a tailgate rear door with a working electric window from a 1984 and a dash electric rear window controller from a 1980 and through trial and error managed to figure out how to make it work. We ended up by-passing a relay in the door that has us stumped. We have no idea what the relay does but the window seems to work fine without it. The original truck had a manual window which not only didn't work but the window was shattered.

Joe got a little spring we needed from the junkyard and installed it in the driver's side door. That fixed the problem of the latch mechanism locking on it's own.

The key had broken off in the new tailgate so we took that to a locksmith and very quickly knocked out a couple of keys for it. I guess we'll get the door locks keyed the same eventually. Right now you need two different keys to open all the doors.

November 2003 - My brother-in-law Joe W. has worked on weekends this month re-building the body of the truck. He has the right rear quarter panel welded back in shape and will start next month on the left rear. There is a little welding to do on the front on each side where we cut out for the wheels. Once that's done we plan on moving the car indoors to a garage where Joe will work on finishing the body.

Ricky bought a new rear tube bumper to match the front one he bought last year. It has a 2" receiver built into it.

Ricky and I installed a radio/cd player yesterday and just that simple addition gave the rather beat up appearance of the interior a new look. We learned a lot about the wiring of the jeep (and soldering) in the process since we managed to blow three or four fuses in the process of installing two old radios first, that turned out didn't work, before Mr. Bob stepped up and offered to buy Ricky a new one for a xmas present. The new one installed easily and works great. Thanks Mr. Bob!

February 2004 - We moved the car up to Mr. Bob yard where he has a nice big garage for us to work in. Late last year we had the front hub on the drivers side replaced and also had the U-joints replaced. Ricky installed some new shackles on the front end for a little extra lift. Joe has been working on the body work and had finished most of the welding necessary before the finishing work on the body starts.  He's started grinding some of the welds and fiberglassing over those areas. We've still got some work to do on the driver's side floorboard, but things are shaping up fast. One of these days I'll get the camera up there and get some pics posted.

June 2004 - Over the last month or so Joe has been finishing up the body work. This weekend (June 13) he started painting! We helped with some final sanding and taping. The color is "Prowler Red", awesome! Unfortunately it was a little dark in the garage and the pics aren't too great, but check them out in the photo album. Joe says we will be finished with the painting by next weekend. He will help us put some of the trim and new fender flares on, then Ricky and I will have to put the finishing touches on. Lots of  lights to put back on, finish redoing the floor on the passenger side (we started that last week), put bed liner on the entire inside floor, Ricky wants to replace the inside panels with a light weight diamond plate, and put the bumpers on, spruce her up and send her off for inspection.

October 2004 - Over the last several months we finished the exterior of the jeep. We put the bumpers on, put new fender flares on, got all the lights working including purchasing new front turn signal assemblies, put the grill on and started on some of the interior work. We sent the truck off to a local restoration shop called Fat Daddy's in Pasadena and they cut out the front floor and completely redid the floor. We had to remove the gas tank ourselves before it went up there and discovered a bunch of holes drilled in the tank from some of our earlier patch jobs on the floor. So we hit the local junkyard and found a gas tank to replace that one.

When we got the jeep back we reinstalled the gas tank. We had to drop the drive shaft to get it in. Then we purchased a Huerculiner kit and completely sealed the interior floor with that touch stuff. Looks great! Once the floor was done we ordered a set of racing seats from Air Dynamic Racing, Inc. Installation required some improvising as the new floor didn't have the same contours as the original and the seat brackets weren't level. With a little welding and some spacers we 'got er done' and the seat are perfect.

We've cut the diamond plate and installed it in place of the inside panels. Man is that cool! So things are looking good. We've got some work to do on the dash to pretty it up a bit, we'd like to get a new headliner installed and other than sprucing up the engine we're almost ready to go. We hope to put a new engine in her someday, but plan putting her on the road without that expense. Oh yeah, I finally found a source for the tag light bulb and ordered it from www.grandwagoneers.com .

We purchased new headers and a new carb and plan on installing them the Saturday after Thanksgiving, if all goes well. We discovered this month that one of the hinges on the real tailgate is broken. That's a real disappointment since it will mean tearing up the recent repairs on the back floor to get to the access plate. Oh, well.

We spent two frustrating days installing a 4" lift kit. The problems had little to do with the kit itself (from Rusty's Off-road) and more to do with bolts that had been in place since 1983. We used the torch a few times to cook the bushings and free the bolts that hold the leaf springs in place. We destroyed the bushing in one of the rear shackles getting the bolt out, but managed to cut a bushing out of one of the old leaf springs to use in it's place. We also had to burn our a small section of each of the spring mounts in the very back of the rear. The new springs are just a bit shorter than the old and the shackles couldn't pivot far enough to fit. All in all we're pretty proud of ourselves for gettin' r' done' -- without the directions which we lost. Ricky says the truck now has 5" lift (he added 1" blocks in the back and longer shackles in the front.

October 2005 - Shipped her off the Appalachian Off-Road in Westminister to have the running gear from a 1978 Chevy K-30 and some lift installed.

July 2006 - We got her back from Appalachian Off-Road and the results are spectacular. Check out the new and improved 'GOJO' (that's what everyone calls her due to the unique color which resembles the product packaging of the hand cleaner of that name.) 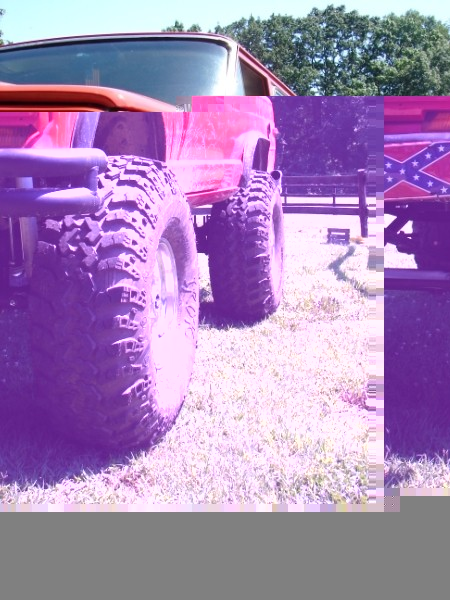 And soon the next project: A 1985 Grand Wagoneer: